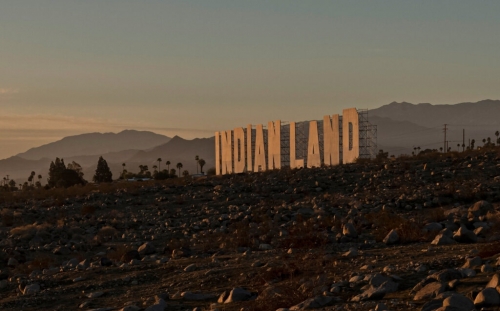 PALM SPRINGS, Calif. — The odds were fully stacked against the Desert X biennial taking place this year. Bigger and better-organized destination exhibitions have punted on their plans since the pandemic struck, and even in the best of years, Desert X, which commissions site-specific public art in and around Palm Springs, has a hard time raising money to realize its projects. Its decision two years ago to accept funding from the Saudi Arabian government for a spinoff event caused prominent board members to resign and artists to speak out in protest.

And the guest curator chosen for the 2021 edition, César García-Alvarez, fell ill with Covid-19 last year, just as he began working with artists to develop their projects. “I was very sick from mid-March through the end of May, and I still am; I’m a Covid long-hauler,” he said. “It was hard organizing a show like this during a pandemic, I think we’re all very honest about that,” he added. “But it was important we continue to do this and continue supporting artists.”

Neville Wakefield, who is Desert X’s artistic director and co-curator of its third edition, agreed. “We never considered canceling it,” he said of the show, which opens on Friday. “Just the opposite. The fact that we’re outdoors and free to the public made our purpose more urgent in some respects. While museums in L.A. have been closed for a year, we felt a responsibility to do what our walled institutions couldn’t and nourish the need for culture.”

The biennial is smaller than usual, featuring the work of 13 artists compared with as many as 19 in years past, with a more compact footprint. “We weren’t sure if hotels would be open, so we organized a show that someone from L.A. or San Diego could drive in to see in a day,” said García-Alvarez. (They are installing hand-sanitizing stations at some artworks and “health ambassadors” at others to distribute masks and ensure social distancing.)

Nodding to the history of terrorism against Native Americans more than 9/11, Galanin’s “Never Forget” turns the standard acknowledgment of Indigenous land rights into a monumental admission of wrongdoing. Near the Palm Springs Visitor Center and Aerial Tramway, long considered the gateway to the city, Galanin’s message looms large: a 44-foot-tall sign that says “Indian Land” in white lettering styled like the Hollywood sign, which spelled Hollywoodland when it was first erected in 1923. “The original Hollywoodland sign was an advertisement for a real estate development for white-only land purchases,” said Galanin, a Tlingit and Unangax artist who lives in Sitka, Alaska. “This work is essentially the opposite: a call to landowners and others to invite them to join the landback movement.” He has identified a plot of land near the sign that is for sale and started a GoFundMe campaign to try to purchase it and return it to the Cahuilla peoples.