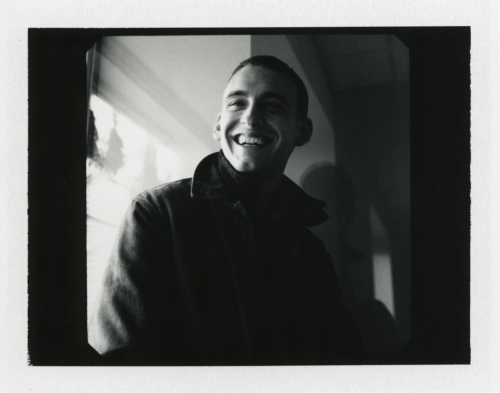 Peter Blum Gallery will represent the artist in New York with an exhibition opening on April 9, 2020

My presence as an artist serves as a conduit through which each individual viewer is invited to participate in the shared activity of remaking our world, here and now, out of the things that exist around and within us.

Erik Lindman's work often uses anonymous found surfaces as compositional elements: sheets of painted luan, fragments of plastic armatures, or marred shards of stainless steel are joined, glued, and screwed together, initiating a cascade of decisions that ultimately articulate value and attention. Cropping, awareness of scale, and use of negative space combine with the absorbency, luminosity, and superficial variation of these surfaces. All of this activity opens a space within and around the viewer, specifically focusing attention on painting’s cultural ramifications and the plain facts of their existence. Lindman continually attempts to construct painting anew, calling attention to the reality that surface is always a coming together of materials made to adhere to each other. In this same way, his sculpture is an extension of this practice, but unlike the paintings, they investigate a sequential series of viewpoints, each dissimilar and separate from the next.

Peter Blum Gallery welcomes Erik Lindman and we are delighted to have him join the gallery.

Erik Lindman’s work has, almost since the beginning, involved found objects. He has an eye for materials that might engender a good painterly—and now sculptural—composition. Sometimes they have been included in paintings as compositional elements, while other times they are present only by implication, as a matrix through which an imprint is left, or a series of marks or gestures laid down and built up. In this way these materials do not overwhelm the work with their earlier non-art identities, as with the Duchampian legacy of the readymade, nor do they become fully subsumed into a pictorial logic, as with the Cubist tradition of collage. Rather, they are somewhere in-between, somehow both themselves, and willing actors in an aesthetic narrative.

Erik Lindman (b. 1985, New York) lives and works in New York. He earned his BA from Columbia University in 2007 and received a Yale Norfolk Painting Fellowship in 2006. Lindman was honored at the Artist x Artist Gala by the Hirshhorn Museum and Sculpture Garden in 2019 and is a recipient of The Louis Sudler Prize for Excellence in the Arts as well as a Ellen B. Stoeckel Fellowship. His work has been included in exhibitions at such institutions as the Kunstalle in Freiburg, Switzerland, the Museum of Contemporary Art, Chicago, White Columns in New York, le 109 in Nice, France, Kaviar Factory in Henningsvær, Norway, and Foundation Hippocrène in Paris, France among others.