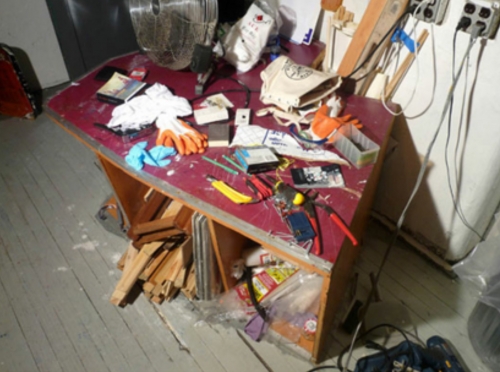 Erik Lindman makes small to medium-scale abstract paintings and sculptures using a variety of techniques. The most interesting of these being perhaps the recycling of existing paintings to make new and presumably more successful works. It is a structuralist technique of turning material (and technique itself) into imagery. The simplest example of this latter approach can be seen in the diamond pattern that reappears painted, scratched, or otherwise affixed to the surface of his latest paintings. The shape references various iconic examples of abstract and geometric painting. The right angles found in Frank Stella’s Polish Village series comes to mind, but more interestingly the pattern also parodies the diamond shape found at the center of cheap stretcher frames. This structuralist bent, and the mutable quality of each painting, suggests a kind of celebration or portrait of process and lends the paintings an air of suspended completion; it's easy to imagine the artist pulling one off of a gallery wall and using his box-cutter to quickly re-arrange its surface, which in turn follows Picasso's sage advice that to finish a painting is to "kill" it.

Bozidar Brazda: So how long have you been here for?
Erik Lindman: Two years.

BB: And the space is free?
EL: For me: I take out the garbage.

BB: And what kind of building is this?
EL: I think it used to be a brewery. Then it was a movie studio of some sort. It’s a steel factory on the other side.

BB: And there’s obviously other artists in the building. Do you socialize with them?
EL: Nope, no one’s ever here.

BB: No daylight. Obviously daylight is less important these days to painters than maybe it was historically.
EL: Yeah...

BB: Is this big enough for the scale of what you do?
EL: Well, I make very domestic-sized paintings and this kind of feels like a little house.

BB: We were talking about scale when we were at White Slab (restaurant) and you were saying that as it stands you're not interested in doing the giant, alpha-male oversized thing. I don't want to generalize but there's a bit of a trend towards moving away from that scale which kind of defines more my generation, without naming names, people making super-sized work.
EL: Yeah.

BB: What do you think that comes out of this move away from large painting and sculpture?
EL: Personally, it's just unmanageable for me to make large-scale paintings. I’m interested in having a painting that can travel easily: taxi-size paintings. Keeping them smaller also helps me to focus.

BB: The wooden frame on the outside of this canvas [pointing to a work on the wall] suggests a window or something you can enter. Is that intentional, that suggestion of ‘perspective’?
EL: Well, I think it's pointing at that. It’s somewhat corny in its literalness. But I think you need to give a little bit, literalness isn't so bad actually.

BB: Being literal is almost full circle from irony.
EL: I hate irony. I think irony is too easy.

BB: You were born here or raised here?
EL: Both.

BB: In this area?
EL: No on the East Side. I've come to terms with that.

BB: A few years ago, if you had stock in overhead projectors you could have gotten rich. There was so much appropriative re-painting and deconstructing of images taken from the internet, pop-heavy art. It feels like that moment, for the time being, is being kicked aside for people more interested in surface. I wonder what attracts you to making work that isn’t Pop?
EL: I’m interested in painting, but I want to consider myself an artist. I’m not interested in a practice that is not based in the studio. That, I felt, was coming out of the 'projecting thing' – this idea of being a conceptual artist.

BB: So you want to make stuff. It’s not about the making of ideas but instead it’s about the idea of making. I guess this wood [pointing to a canvas which has a replica of a wood stretcher frame attached over the canvas] has a kind of basic carpentry aspect.
EL: Very basic carpentry, and it is made to be taken apart.

BB: Right.
EL: This work is all made of stuff that I find, and existing work of mine, that I reassemble to make something that I would normally never have thought to make. If I have an old painting that didn’t work out, I take it apart and figure out how to make something else out of it.

BB: So you’re recycling too. That’s very green.
EL: I’m very cheap. But it's not some sort of aestheticization of trash.

BB: Those aren’t yours, right? Those [pointing to three highly varnished, assemblage sculptures] are a bit of an aestheticization of trash. There’s a bit of Ed Keinholz going on there.
EL: Yeah. They’re mine. They make me feel uncomfortable actually. They’re really un-cool.

BB: Which is ok.
EL: I think that's probably good.