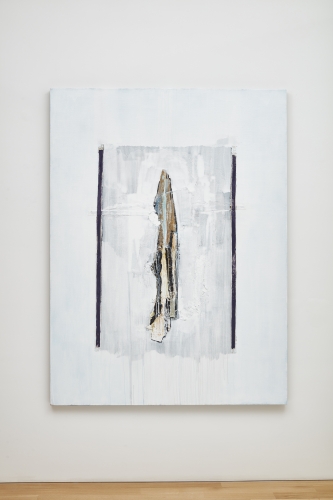 Since the beginning of his artistic practice, Erik Lindman’s incorporation of anonymous found surfaces as compositional elements in painting has occupied a central place in his work. Reinterpreting and repurposing cast-aside materials such as shards of steel or canvas webbing, he combines a variation of surfaces in a cascade of decisions with a focus on scale and negative space. Lindman lays down and builds up marks and gestures, ultimately articulating value and attention while asserting the materiality and tactile nature of each painterly composition. His topographical surfaces become the final result of what is buried beneath them, and upon closer inspection, layers of paint reveal further color and traces of discarded elements. As Lindman states, his practice and methods are the most efficient means he has discovered to create a space of reflection and contemplation for viewers to generate their own meanings.

Underpinning the exhibition is the allusion to the myth of the Arthurian knight Parsifal and his quest for the Holy Grail. The title Fal/Parsi literally means “Pure Fool” in the Arabic origin of the name. As Lindman comments, “I see the ‘Pure Fool’ as an analogy for the painter of modern life, the artist who can only manage to take a stab at creation through ignorance of its futility, and yet paradoxically because of this serves as a vital channel.” His practice with its inherent content and subject matter intends to add to the complex discourse of abstract painting for his own generation and time. Lindman pursues a new mediation of abstract traditions, both original and eclectic, while instilling subjective importance into his multifaceted process.

Erik Lindman (b. 1985, New York) lives and works in New York. He earned his BA from Columbia College, Columbia University in 2007 and received a Yale Norfolk Painting Fellowship in 2006. Lindman was honored at the Hirshhorn Museum’s Artist x Artist Gala in 2019. He has also received The Louis Sudler Prize for Excellence in the Arts from Columbia University in 2007, and has received an Ellen B. Stoeckel Fellowship for Yale Norfolk School of Art in 2006. His work has been included in exhibitions at the Kunstalle in Freiburg, Switzerland, the Museum of Contemporary Art in Chicago, White Columns in New York, le 109 in Nice, France, Kaviar Factory in Henningsvær, Norway, and Foundation Hippocrène in Paris, among others.

Link to Article
Back To Top